A Modern Retelling of Salahadin

Every now and then, we stumble on a project that is driven by pure ambition and vision. Amateur film director, Ahmad Saadaldin, and his talented crew are trying their hand in the world of film with a proposed series about the life of Salahadin. After four-months of dedication and hard work, the team produced a visually stunning teaser for their planned series. They are now in the writing and production stage of their project and have launched a crowd funding campaign to raise funds for a 45-minute pilot episode.

So why Salahadin? How exactly are they planning on doing this? We have the low-down from Ahmed Saadaldin below:

Why another movie about Salahadin? What inspired you to feature the story of this historic leader over other possible film themes and ideas?

The illustrious story of Salahadin is one of a historically notable Muslim figure and leader and as such, deserves to be told time and time again. Many of its themes and lessons can be universally applied, so our generation has a lot to benefit from learning his story. Furthermore, there will always be variations in which this character has been portrayed in film and media, so we wanted to present our own unique take on his story.

Our vision is exceptionally different from that of other projects on Salahadin. First, unlike most projects, our aim is to produce an entertaining and informative SERIES that focuses on historical accuracy in order to shed light on the cultural and religious aspects of the Middle East. Second, although most stories portray Salahadin’s latter days during his encounter with the Crusaders, our project will put more focus on his early days as he began his journey and rose to power as “the most chivalrous man in history.”

Since your own background is not in film, what were the steps you took to mobilize your resources and complete the trailer? What were some of the unexpected success and setbacks along the way?

Every summer my friends and I produce and post a number of comedic videos just for fun. This summer we decided to use our creative talents and abilities on a more meaningful production. We heard about Kickstarter and crowd funding, so we decided to take advantage of the opportunities there and make a short teaser trailer. We were very fortunate to receive a donation from a generous member in the Tampa Bay community, allowing us to buy the props and equipment to design our set and cover other costs – storyboarding, custom clothing, etc. A close friend of ours is a cinematographer; he helped us bring the story to life. There were a number of setbacks, mainly with prop selection and finding actors, but I would say our successes with this project definitely exceeded any setbacks.

How are you going about the research and documentation of Salahadin’s life, and how do you plan to balance the historical-informative angle with the creative storytelling?

We have been researching books like “The Rare and Excellent History of Saladin” by Bahaa Al-Din ibn Shaddad, translated by D.S. Richards. Ibn Shaddad was extremely close with Salahadin, so most of his information is from the Sultan himself. We also listened and documented a number of lectures by Islamic Scholars and historians. What’s interesting about Salahadin’s life is that it is full of thrilling events, so dramatization is not really required. His story is full of drama and excitement, loyalty and betrayal, bravery and action, defeat and depression. His life is literally the game of thrones.

How do you envision your lead actor will depict Salahadin, both in personality and culturally?

Salahadin was a kind, patient, and wise individual – all traits that I plan to embody and portray, even though, I sadly admit, this conflicts with my own personality.  Salahadin was a Kurd, which is something that we have in common, so I feel a special connection with the role. I think it’s important to stress that Salahadin was not an Arab, as many believe, because it confronts the stereotype that all Muslims are inherently Arab and vice versa. It is also important because it depicts the unity that Salahadin created amongst various types of ethnic people, standing side by side for the sake of God for the purpose of defeating their foreign invaders (Crusaders).

What would you say is the take-home message of your series? What influence do you hope the movie will have on individuals and communities?

Much like today, Muslims were extremely divided and lost. The rights of mankind were trampled on and disgraced due to this division and greed. I believe this series will teach Muslims the true purpose and meaning of unity, as well as show people of others faiths the truth about Islam. There are numerous misconceptions and stereotypes about Islam perpetuated in the media. These are the same misconceptions and misguidance that caused the crusaders to BELIEVE that invading and killing Muslims would bring them blessings in this life and paradise in the hereafter. 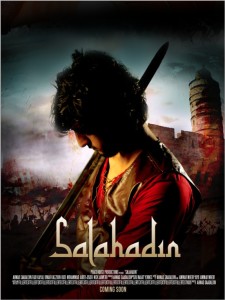 In the long-term, what is your dream for what this series will lead to?

It is our hope that this production becomes a series on the History Channel. The History Channel has seen a great response to their new shows like the Bible, and Vikings. The life of Salahadin has a lot of potential for an entertaining/informative series, and his journey is one that should be examined over multiple episodes, even multiple seasons. Obviously, we would continue to produce the series on our own with or without a major network or channel. It is our hope now that we raise the money we need on Kickstarter in order to produce the pilot episode and show the world what we have in store.

Anything else you’d like to tell readers about yourself and the series?

I would like to give a big thanks to Manal Fakhoury. She has been an inspiration, an amazing mentor, and one of our biggest supporters. I would also like to thank all the cast and crew members who were directly involved in this production: Mohammed Jabber, Nick Armero, Ammar Mheir, Omar Kazzoun, Najat Yennes, Fadi Kayali, Omar Erchid, Shady Nassar, Umar Abunamous, Hamed Al-Jabali, Mohammed Barazanji, Mohammad Shair, Mohammad Kiswan, Haitham Zbib, Marwa Hijazzi, Murad Ottallah, Laith Abdel, and Mahmoud El-Kasaby.

Lastly, I would like to give a huge shout out to the entire Tampa bay area and all the supporters of Salahadin around the nation.

We hope that the viewers out there who watch and enjoy our trailer support us with a contribution and share our project with their friends and family.